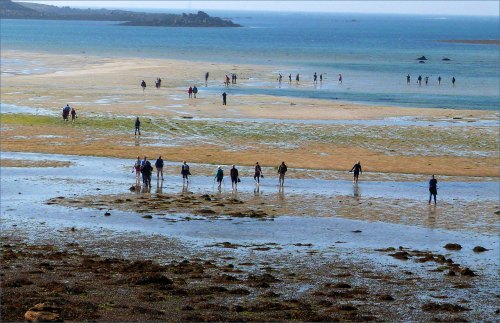 The Isles of Scilly include five, small inhabited islands, four of which once formed a single larger island (the exception was St Agnes).  But around 3000 years ago rising sea levels divided the land and created the present formation.

The channel between Tresco and Bryher is normally very busy with boats ferrying tourists and residents between islands as well as providing anchorage for visiting yachts.  But four or five times a year, for a short while on three or four consecutive days, the sea bed is exposed.  It is the time of the Spring tides  –  a time when it is possible to walk between Tresco and Bryher and, indeed, between Tresco and St Martin’s.  For those whose holiday happens to coincide with a Spring tide the walk is often high on their ‘things I must do’ list.